Peter Copping graduated from Central Saint Martins School in London and later from the Royal College of Art.  Copping lived and worked in Paris for 20 years until Oscar de la Renta invited him to work by his side at  his fashion house in November 2014. Unfortunately Oscar de la Renta passed away this year, but Peter Copping was able to show a successful debut collection on February 2015. 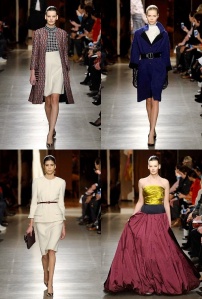