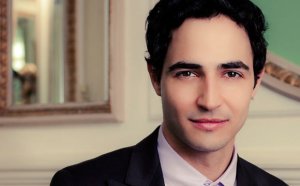 Zac Posen is a busy and dynamic fashion designer.  He is responsible for 18 collections a year (18 seasons).  Not only is he in charge of his own eponymous brand, he is the creative director for Brooks Brothers and David’s Bridal. He also serves as a judge on Project Runway. His secondary line is called 9 to 5.  He recently designed the costumes for the Rockettes.

I was lucky to hear Ken Downing, fashion director for Neiman Marcus, interview Zac Posen at the Wallis Annenberg Center for the Performing Arts in California on Monday April 20, 2015.  Downing introduced Posen as a dramatic designer who not only brings high drama to the runway, but also makes beautiful, wearable clothes that enchant the editors as well as the customers.

Zac Posen had his first show at age 21. He studied design at the St. Martins College of Art and Design in London. He took New York by storm when he brought back Hollywood glamour to the runway.  He admits that draping is his signature and he is known for designing ball gowns.  But he also loves to design sports wear

After working in New York with his sister as the creative director, he left for Paris, where he became a member of Chambre Syndicale and showed for one year in Paris.  He came back to New York to continue the tradition of great American couturiers.  He sites Carolina Herrera and Oscar de la Renta as his role models.  He’s inspired by the human body and movement.

Zac Posen loves dressing women and he wants all women to look beautiful at every price point and every size. Although he dresses a lot of celebrities, I loved when he said with great humility that he wants to represent women of all ages, sizes and races.  For example, at David’s Bridal, he makes clothes in large sizes.