“What I have been trying to do, and what I have probably done, is to make clothes that seem to have existed for a long, long time. In reality they never existed. I am not a designer who creates fashionable aesthetics. I make style out of life, not style out of style.”

Issey Miyake is a Japanese fashion designer, known for his innovative clothing design. He used new technology to create innovative textiles with both Eastern and Western influences for his clothing line, Pleats Please.

Born in Hiroshima, Japan in 1938, Issey Miyake moved to Paris in the 1960s to design for Givenchy, after which he designed for Geoffrey Bean in Manhattan.

In 1970, Issey Miyake started his own design studio, where he experimented with avant-garde Eastern designs.

In the 1980s, Issey Miyake began using technology for his East meets West textiles. He started Pleats Please in 1993 and A Piece of Cloth in 1999. His computer-designed 3-D shapes become folded polygons made from recycled plastic (or PET), that are pulled up over the body to form three-dimensional garments. 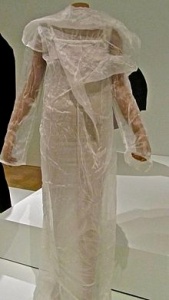