Born in Oran, Algeria in August 1936, Yves Henri Donat Mathieu-Saint Laurent is regarded as one of the most influential and iconic fashion designers. Yves Saint Laurent began his career in 1955 as an assistant to Christian Dior.

Christian Dior was the world’s most famous couturier in 1955 as the creator of the post war “New Look” in France. Saint Laurent succeeded Dior as chief designer at age 21 when Dior unexpectedly died of a heart attack.

He started his own eponymous label with his partner, Pierre Berge` and showed 104 outfits in two hours for his first solo show. Diana Vreeland, the former fashion editor of American Vogue, hailed Yves Saint Laurent as the couturier for the pop generation.

In 1982 Diana Vreeland presented Yves Saint Lauren with a special International Award from The Council of Fashion Designers of America. A retrospective of Yves’ work was displayed at The Costume Institute of the Metropolitan Museum of Art in New York. 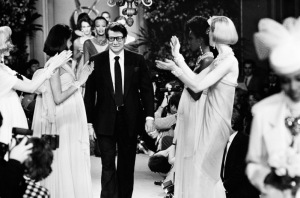